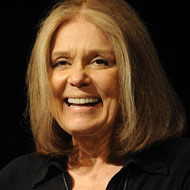 Thank you Gloria Steinem, for adding Michelle Bachmann and Sarah Palin to the list of “women only a man could love.” Steinem had more to say at a luncheon this week in New York City celebrating the upcoming HBO film documentary about her life. “That’s their job,” Steinem said, accusing the two politicians of “selling out” the women’s movement. “That’s just the way it is; it’s inevitable. Think about Phyllis Schlafly; there have always been women like this.”

As reported in New York magazine, I see the luncheon was well attended by women whose lives are better because of Gloria Steinem (Sheryl Sandberg), women that both men and women can love: Tina Brown, Katie Couric, Ann Curry, Gayle King, Leslie Stahl, Christine Baranski, and Kim Cattrall.

The HBO film documentary about her life, Gloria: In Her Own Words, airs Monday, August 15 at 9 p.m.