UPDATE: 16 September 2014
The MacArthur Foundation just named Alison Bechdel in its 2014 class of MacArthur Fellows. She is one of 21 “exceptionally creative individuals being recognized for a track record of achievement and the potential for significant contributions in the future.” Bechdel is a cartoonist and graphic memoirist. Her long-running comic strip, Dykes to Watch Out For (1983–2008) realistically captured the lives of women in the lesbian community as they influenced and were influenced by important cultural and political events. @AlisonBechdel

Here is an EWIP post from November 2013 by Claudia Smukler which cites the Bechdel Test, as the media standard that has persisted as a measure of (any) agency of the female characters in a film.
_____

In the succession of media stories noting when women are “the first” to do something there is the potential to inspire: Sally Ride, the first American woman to go into space; Michelle Obama, the first African American First Lady. No doubt each example encourages others, yet, I am wary of getting too hung up on the rush to celebrate the milestone of the first woman. 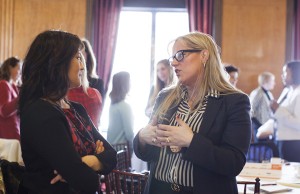 One is not a great indicator of faring very well against gender or racial bias, whether in the White House, in scientific achievements, or in the characters we see in movies. Pointing to the first at something is problematic when the designation has the tendency to single out her gender or non-white status as a preface that often overshadows the persistent bias. Not that we can’t feel inspired by the firsts, but I’m anxious to move on to a measure that demonstrates more forward motion. So, instead of firsts, how about measuring the interaction of “two,” as in, two women talking. 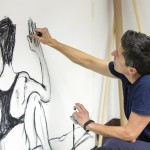 The Bechdel test does just that. Recently the Swedish Film Institute and a Scandinavian cable TV channel announced that it would employ the Bechdel test for rating gender bias in the movies it screens as a service to their viewing audiences. If you have not heard of it, the Bechdel test got its name from American cartoonist, Alison Bechdel who introduced the concept in 1985 in her comic strip Dykes to Watch Out For. The rating system, which has been around awhile and greatly discussed in feminist and film critic circles doesn’t portend the quality or feminist nature of the film rather it is simply a measure of the presence of named female characters who talk to each other. The dismal results for passing the test exposes how dramatically the movie industry, in particular, ignores women’s stories. The goal of using the test, according to the Swedes, is “to see more female stories and perspectives on cinema screens.” To receive an A rating a film must have:

Sounds simple, but even with this low bar, many notable films don’t pass. The failure to pass even this simple test points out the systemic problem with the industry that continues to make movies by white men, for white men and depressingly few for a more general audience. Modify this test slightly and it can be applied to people of color appearing in movies. Counting the scenes where two or more people of color talk to each other about something other than white people in a film, again measures the momentum, or lack of it in Hollywood.

We have to go beyond just counting the firsts which it turns out, are not an indicator of progress. Kathryn Bigelow became the first woman to win the Academy Award for Best Director in 2010 for The Hurt Locker. A significant milestone and a film worthy of the award. Yet, it is interesting to note the movie she made—a war film about a bomb disposal team in Iraq—doesn’t pass the Bechdel test. As of 2014, we have yet to see the second female director win the Oscar.

The paucity of substantive female and non-white characters on the big screen, and more importantly, as active participants in the media, on the board of directors of tech companies, and as representatives in the Congress of the United States is a distressing cultural truth. If we are to make exponentially greater gains toward gender parity in these institutions we need to have a clear standard for who is doing the talking.

Photo of WLC 2013 by Carmen Holt
Photo of Alison Bechdel is Courtesy of the John D. & Catherine T. MacArthur Foundation